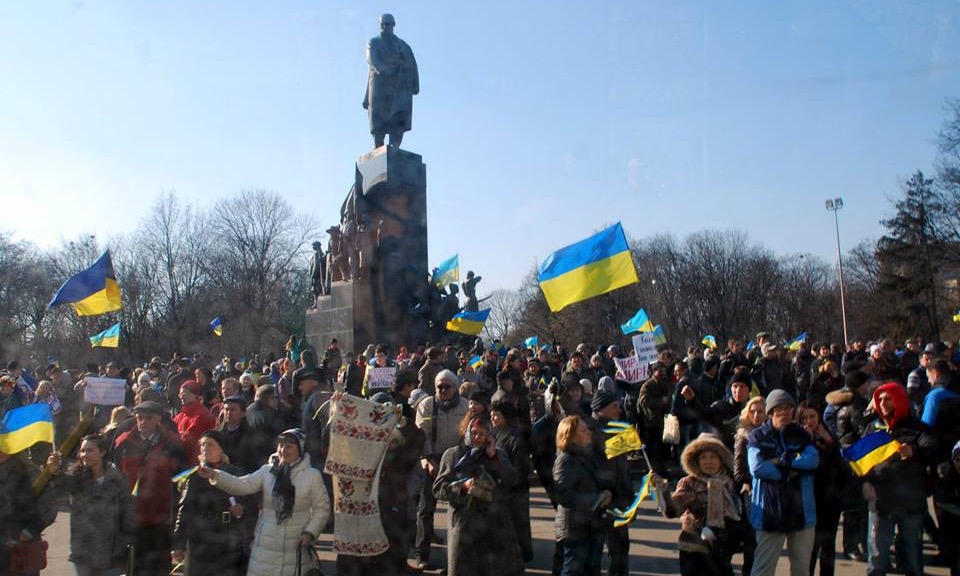 To Kharkiv – to the Russian border

Kharkiv (population 1.4 million) is Ukraine’s second largest city and located approximately 30 kms from the border with Russia. Between 1917 and 1935, Kharkiv was the capital of the Ukrainian Socialist Republic within the USSR before the capital was moved to Kyiv.
The city is renowned for its centers of higher education and museums and features no less than 13 national universities and 20 museums. This gives the city a youthful and cultured vibe.
Arriving at the train station in Kyiv, it turned out that we had been too optimistic about traveling by train. All sold out! Reassessing our options, we hop on a bus to face a 8-hour маршрутка (a type of minibus popular in the ex-USSR) trip across the center and east of Ukraine. Map of route from Kyiv to Kharkiv
In the spirit of location independence, my friend took some business calls while Russian pop music blared on the bus’ onboard TV. ‘Don’t your clients ask you about the Russian disco in the background on the calls?’ ‘Nope. I told them at the beginning that I was traveling so there might be some background noise. No one would imagine that I am traveling in Ukraine and not in the US’, he chuckles. Along the banks of Lopan River in Kharkiv
In Kharkiv, we witness pro-Russia protests, which consisted of about 300 people, militant in tone with a mixture of thuggish young men chanting hostilely and old бабушки (old ladies) waving communist flags. In contrast, Sunday was marked by thousands of pro-Ukrainians of all ages and backgrounds on the streets in a friendly jamboree atmosphere – a big contrast between the two groups. Young women waving Ukrainian flags on a decommissioned tank in central Kharkiv
Our weekend in Kharkiv not only allowed us the chance to savor the sites of Ukraine’s second city but also to gauge the political situation in a city where Russian and not Ukrainian is the most commonly spoken language in the public sphere. Personal experience is a better barometer than relying on Western or Russian media. Statue of Lenin in central Kharkiv
Click here for Leg 6: Flight out of Kyiv

← To Kyiv - Aftermath of the Euromaidan revolution Last evening: Flight out of Kyiv →