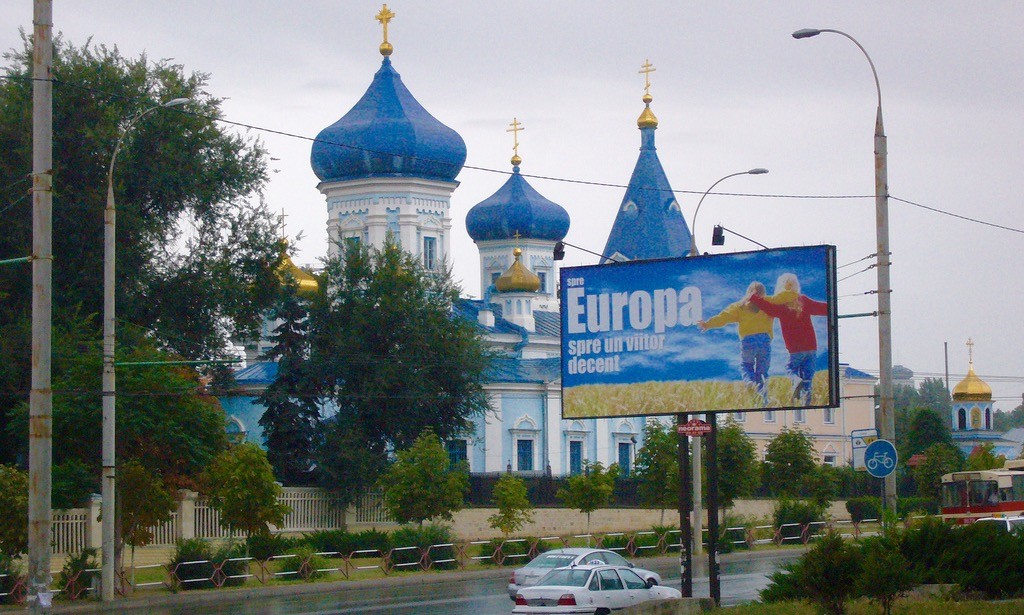 Having rocked Bucharest, we headed by plane to Chisinau, the capital of Moldova. While tourism is not so well developed in Moldova, we can recommend the region’s wine. It seems that almost everybody in this country of 4 million inhabitants has a vineyard.
Of particular interest to me was the bilingual reality of Chisinau where both Romanian and Russian are used interchangeably. I usually read the menu in Romanian and order in Russian (a nice mental test of my translating ability). Map showing Bucharest to Chisinau and our route through Moldova
After a tour of the sights of the Moldovan capital (Parcul Catedralei, Grădina Publică, Ștefan cel Mare și Sfînt, Arc de Triomphe and Pushkin Museum), we head out to sample the nightlife which was certainly of a ‘Wild East’ variety. We dined at Pegas Restaurant and sipped coffee at Tucano cafe. Later on we checked out both Cocos and Skybar nightclubs. Parcul Valea at sunset – Chișinău, Moldova
While we met a lot of friendly and charming Moldovans, we also witnessed a major fracas outside the club. A firearm was drawn which settled the disturbance quickly. WW2 Soviet War Memorial in northern Moldovan village
After a night in the capital, we traveled to the ‘capital of the north’, Bălți. The city is located en route to western Ukraine on making it a logical stopover. It’s Saturday night and after dinner, we enter the only club in town, Daiquiri, where we are quickly invited to a table of locals and the vodka starts to flow. A wild night ensued …
The following morning, as we were taking a midday bus, I go to buy some provisions in the shop in front of our ‘marshrutka’ (bus) when a group of friendly locals invite me for breakfast and vodka. How can one resist such hospitality? 🙂 This region should come with a health warning for your liver.
We then took a remarkable bus ride through the back roads of northern Moldova chatting with enthusiastic locals curious to see two foreign tourists heading towards the Ukrainian border. This is certainly a part of Europe where tourists are a scarcity.

At a bathroom break, we chat with a passenger, Vladimir, an ethnic Ukrainian, who promises us a tour of his village. An hour later, he alights from the bus and persuades the bus driver to wait for a few minutes in his village, so that he can show us the WW2 Soviet War Memorials. It certainly felt rather unique to be granted a tour of such a rarely visited region. Missed the first leg of the trip? Click here for Bucharest, Romania!