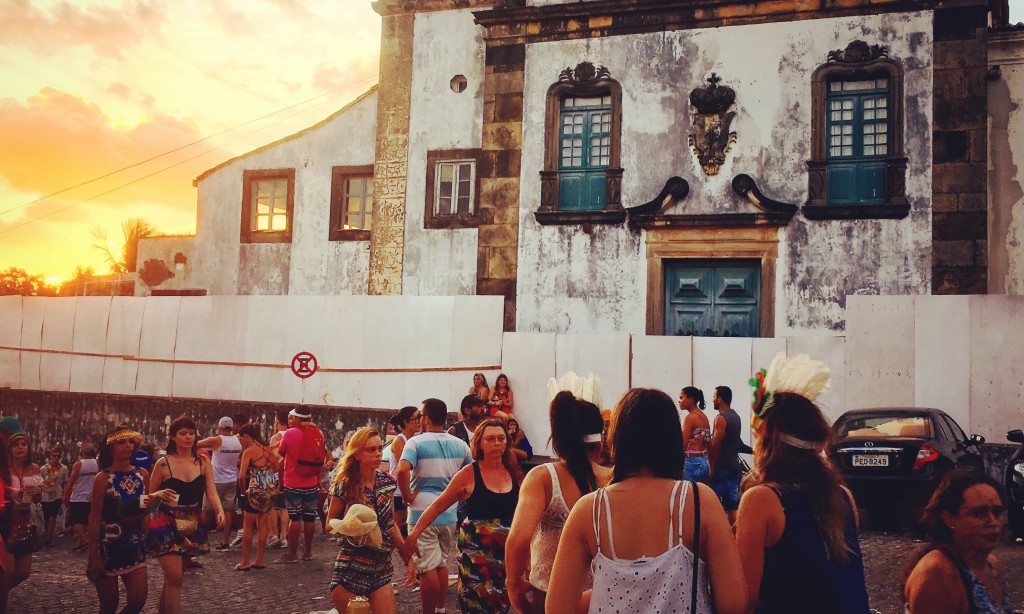 Carnival in Recife/Olinda – Stop 2 of the Dream Carnival

Having survived the wildness of Bahia, I headed northwards by plane to the ‘Nordeste’ (‘north-east’) of Brazil and the capital of the state of Pernambuco, Recife. Recife which means “reef” in Portuguese was once a Dutch colony (1630-1654).

The city has a population of 1.5 million inhabitants and has a beautiful colonial sister city called Olinda, 7 kilometers to the north of the center. Combined around 3.5 million people live in the conurbation.

The region maintains a strong indigenous cultural influence. This indigenous influence is visible in the customs and dances on display during the twin cities’ carnival.

Recife vies with Salvador de Bahia as the best carnival in the world with both cities proclaiming themselves as the ‘greatest’. So which one do I rate to be the better? The highlight of the Recife carnival is the “Galo da Madrugada” (“Dawn Rooster”) which is the biggest street party in the world (in 2015, 2.5 million participants). It takes place at dawn (hence the name) on the Saturday morning of carnival.

The ‘O Galo’ continues all day in the intense heat that is usually summer in Recife (it can often be 40C and humid). As it’s a street party with so many people, you have to lose all concept of personal space and go with the (sweaty) flow of the vibe there.

Also never bring anything valuable – my smartphone is always at risk but I bring it and take it out sparingly to get the odd snap for you guys 😀 – theft and violence are unfortunately risks in this part of Brazil, especially during the carnival.

The most famous traditional music of Pernambuco is called ‘frevo’, which was developed by transforming capoeira movements into almost gymnastic-like moves and is played at a fast tempo with brass instruments. Frevo requires some serious dancing skills to get it right. I usually spend the first two days just getting into it every carnival! Me catching up with a local friend in the Boa Viagem neighborhood in Recife, Pernambuco – Day 3 of carnival – I’m starting to show the strain 😀

‘Maracatu’ (also known as ‘nação’) is another genre that is popular in the city during carnival. Its origins are Afro-Brazilian and began when slavery still existed in Brazil (abolished in the late 19th century). The ‘nações’ perform with large groups of drummers and singers, as well as, dancers in costumes parodying traditional characters.

In the evening, the action moves a few blocks away to Recife Antigo where live bands play a medley of styles. I heard MPB (‘Música Popular Brasiliera’), samba and electro. The temperatures drop significantly after nightfall bringing some welcome relief to the revelers from the sweltering heat.

Sunday of carnival in Recife’s sister city of Olinda is hands down my favorite day of carnival. 😀 The atmosphere is truly amazing as you meander through the cobbled colonial streets. The party gets going from the early morning and climaxes around sunset. Party goers dress is an array of simple costumes (whose style reminds me of those worn in Cologne, Germany for their carnival (or ‘Fasching’ in German).

The center of Olinda has several hills so the best approach is the meander through its historic streets going with the currents inherent in the ebb-and-flow of such a mass of revelers in a confined space until you you reach the top to marvel at the view back down onto the historic center.

As is the tradition during the Brazilian carnival, both guys and girls are looking for a ‘beijo’ (a ‘kiss’) and many of them at that 😈 so watch out if you are not into freely exchanging saliva! Many Brazilians don’t really ask for your permission to make out with you – zika epidemic or no zika epidemic! 😮 The colonial city of Olinda on the Sunday of carnival

Another useful word you should know is ‘paquerar’ which means to ‘pick up’ or ‘to have sex’ depending on the context. Perhaps your hookup will continue over 5 days of carnival so that you two become ‘ficantes’ (similar to ‘sex buddies’ in English). If that’s not your style, you should insist with your new Brazilian carnival friend that you two start to ‘namorar’ (officially ‘dating’). The costumes are certainly colorful (and possibly controversial) on the Sunday of carnival in Olinda, Pernambuco

The sun setting over magical Olinda is one of the most beautiful moments of carnival. After dark I continued dancing to the high charged frevo beat before concluding this leg of the carnival back in Recife Antigo where the music ended around 4am. Late night party at the carnival in Recife Antigo

After a few hours sleep, I reflected on the trip so far at breakfast in my hotel at the beach area of the city called Boa Viagem. Two down and one to go! So far the trip has been epic. Which carnival did I prefer so far? Salvador or Recife? They are both amazing and quite different experiences but I am marginally leaning towards Recife – the outstanding Sunday in Olinda is the clincher for me!

The next and final stop in my dream carnival trip: Rio de Janeiro (‘A Cidade Maravilhosa’). Click above to read about Leg 3 of my Dream Carnival: Rio de Janeiro!