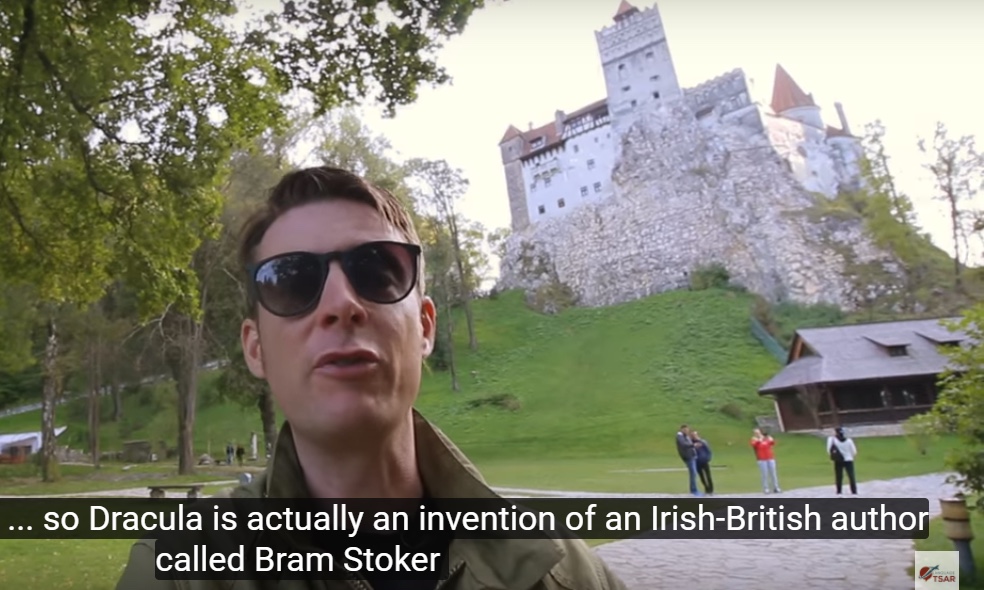 An Irish vlogger came to Transylvania to “kill” Dracula

“This branding is pretty cheap. Transylvania is a dream place and in the top 5 most beautiful regions in Europe”

This is the English version of an interview that I gave to Călin Danilescu which was printed in La Republica (in Romanian here).
Calin: Hi Conor. What did you know about Transylvania before visiting the region?

Conor: I have to confess that although the name ‘Transylvania’ is extremely well known abroad – because of its association with the novel ‘Dracula’ by Bram Stoker -, I had virtually no accurate knowledge about Transylvania before I started researching my trip.

The first thing that struck me was the region’s historical German community and their contribution to Romania’s development, whether that be the literature of Herta Müller or the current Romanian president, Klaus Iohannis’ time as mayor of Sibiu, German-Romanians have left an indelible and valuable imprint on the country and this is particularly evident in the architectural landscape of Transylvania.

Calin: So you found the German heritage in Romania to be of much interest as a foreign visitor?

Conor: Yes, definitely. Very few other Europeans are aware of this community’s existence and the historical Saxon towns of Sibiu, Brașov and Sighișoara, for example, are stunning places to visit. It’s very different to the image of Romania all too often portrayed in the Western European media.

Calin: You mention the book ‘Dracula’ and its connection with Transylvania. Do you think that the association of Transylvania with Bram Stoker’s novel is good or bad for the region’s image?

Conor: Bram Stoker wrote ‘Dracula’ with very little knowledge of Transylvania or its history and basically took Vlad Țepeș moniker out of context by making him a vampire in the novel. So the connection between Transylvania and the famous vampire is flimsy and it always gives me a wry smile when Romanians and foreigner visitors are unaware that Dracula was essentially the fantasy creation of an British-Irish author.

That said, Dracula does provide the region with instant name recognition and especially for advertising Bran castle and several other historical sites that are associated with Vlad Țepeș and marketed as being ‘Dracula’ this and ‘Dracula’ that. Unfortunately, I found the paraphernalia around Dracula to be quite tacky and that’s a pity considering the enormous potential of Transylvania as a region thanks to its rich and varied culture and bucolic beauty.

So while Transylvania does enjoy benefits in terms of tourists numbers from the Dracula brand, it also cheapens the value of the brand to a certain extent, I feel.

Calin: You have visited all 50 recognized countries of Europe. Where would you place Transylvania in terms of its natural and architectural beauty?

Conor: Right near the top! : Iceland probably remains my favorite country in Europe for landscapes (which are truly phenomenal) but Transylvania is definitely in my top 5 list for my most beautiful regions of Europe. Ending the trip by driving up the Transfaragasan and its unique and amazing vistas was the cherry on top to a remarkable trip. Unforgettable! :

Calin: You also referred to the ‘varied’ culture of Transylvania. What kinds of cultures did you encounter there? Not just Romanian and German?

Conor: Transylvania has several different ethnicities, in addition to, its ethnically Romanian majority and this adds a bit of extra spice to the mix. Hungarian, German and Roma people give the region a more elaborate linguistic, architecture and culinary infusion that a visitor might expect on a trip to Romania.

Calin: Ah, you mention our Roma minority as one of the ethnicities. In your video, you enter a Roma ‘muhalla’. What motivated you to go there and were you not scared?

Conor: The Roma have a much maligned reputation across Europe and sometimes this is disproportionately connected to Romania itself. We noticed the Roma area of a small town in Transylvania when we were leaving and went down into it on a spur of the moment decision. My friend was basically like ‘f*@k it’, let’s just do it’.

As you can see in that part of the video, one of the Roma children is well mannered and excited to try to speak in German with me. He also answers in Romani when I ask him to. Unfortunately, the other children were pretty rude and demanded money if they spoke to me in Romani. They also started to open the back door where my camera equipment was. At this point we decided to leave … so there you see that while it was not an intimidating experience, it also required being prudent when interacting with the children there.

Calin: Finally, how would you sum up your trip to Transylvania?

Conor: Dreamlike! Transylvania is a magical place that every traveler in Europe should visit. For sure, I’ll be back there sometime soon. 🙂