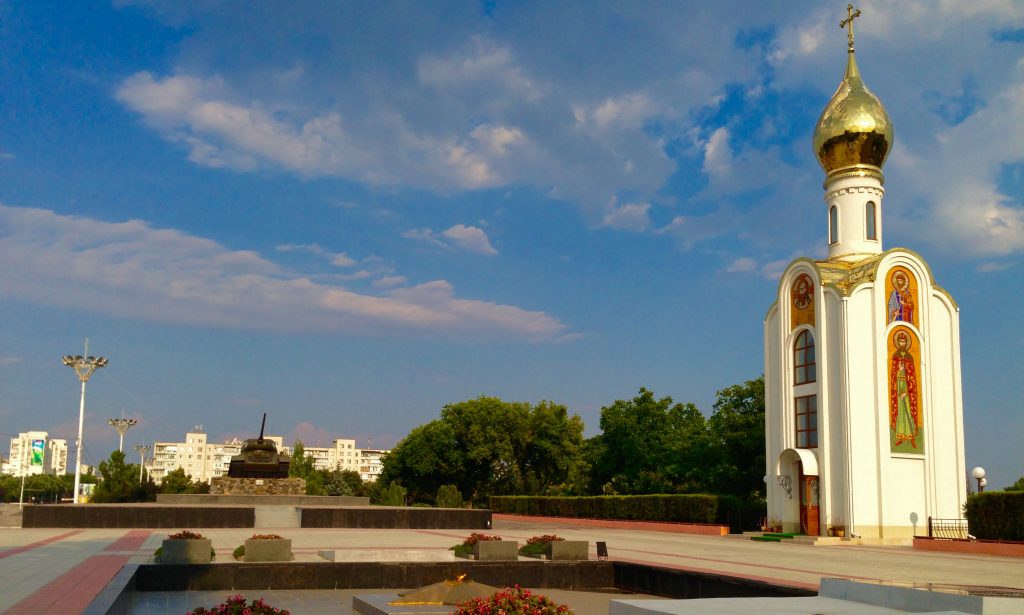 Travel to Transnistria, Moldova: what is it really like to cross the border?

Transnistria is a de facto independent territory within Moldova that is not internationally legally recognized.
It declared independence from Moldova in 1990 and after a limited military conflict with Russian troops supporting the separatists, a ceasefire was declared in 1992.
The approximately half-a-million locals refer to their ‘country’ as the ‘Pridnestrovian Moldavian Republic’ (Приднестровская Молдавская Республика). Ethnically the country is roughly evenly split between Moldovans, Russians and Ukrainians with a smattering of other groups such as Bulgarians, Gagauzians, Poles and Jews also present.
The official languages are Russian, Moldovan (Romanian written in Cyrillic) and Ukrainian.
In the short video above, you will learn about the reality of crossing the border to Transnistria from Moldova and catch a glimpse of the sights of its capital city, Tiraspol. The people of Tiraspol were extremely friendly and welcoming.
In spite of the horror stories abounding online of intimidation at gunpoint being used by the Transnistrian border guards to extort money from Western tourists, this was not my personal experience at the border. The border officials were polite and professional in their conduct.

I entered Transnistria by bus from Chișinău and exited by train to Odesa in Ukraine. This allowed me to experience crossing the border by both means of transport. Map showing the location of Transnistria
There is no visa requirement or fee for entering Transnistria. If you stay longer than 24 hours in Transnistria, you must register with the authorities in Tiraspol. I stayed at Hotel Rossia, where this was done for me by the staff at reception. This would have allowed me to stay up to 30 days in Transnistria. The following are general guidelines for traveling by train and bus.
Update: In October 2013, I returned to Transnistria both entering and exiting the territory by taxi. Again there were no incidents with the border officials. I was asked if I had a customs declaration to make and how much foreign currency I was carrying upon exit.

By international agreement between Moldova, Russia and Ukraine, the Transnistrian border guards are not allowed to board the train that travels from Chișinău to Tiraspol to Odesa.

There is no border control on the Moldovan side when entering Transnistria (as it is not an internationally recognized border) and only the Ukrainian border guards will control passports upon entering Ukraine on the train. However, if you do enter by train, you must register with the Transnistrian authorities upon arrival in Tiraspol.
I left Tiraspol by train and while I was waiting on the platform, the Transnistrian police approached me and other passengers and requested that we return our cards before boarding the train. Tighina Fortress in Bender, the second city of Transnistria За Родину! (For the Motherland!) – Soviet slogan on WW2 tank