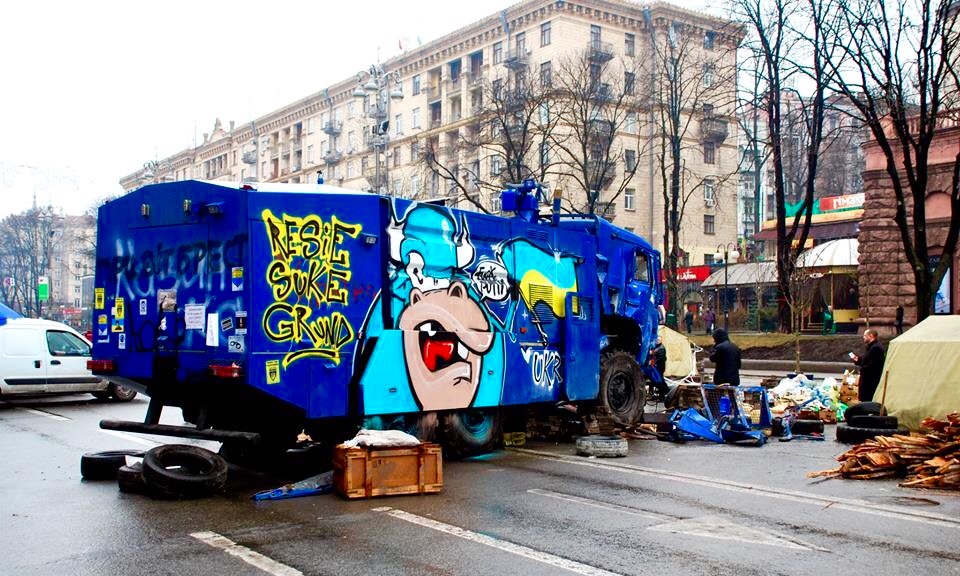 Since late 2013, I have been spending a considerable amount of time in Ukraine, a country that is experiencing significant political instability. Protests against President Victor Yanukovich began in November 2013 and lasted until his ouster on 22 February 2014. Subsequent to the departure of Yanukovich, a transitional government was installed in Kyiv.
Fears abounded that an invasion of the rest of the country was imminent. A similar process of armed separatists taking over buildings in the east of Ukraine began. The regions of Lugansk and Donetsk have been subjected to a low-intensity war that so far has lasted several months.
So why travel to a country in the midst of such instability?
Firstly, as a former student of international relations, I have always found Ukraine an interesting country. Visiting during a conflict that had in part been predicted by Samuel P. Huntington in his book, Clash of Civilizations, was stimulating. Huntington had listed Ukraine among the “cleft” countries containing very large groups of people identifying with separate civilizations.
Ukraine is a former Soviet republic whose current de jure borders were fixed by the Soviet Communist Party in 1954. Ukraine is often described as a big family with substantial differences between its regions. Western Ukraine has traditionally had a big Polish influence and Ukrainian is the predominant language.
The Transcarpathian region was annexed by the Soviet Union in 1945 and still has a considerable Hungarian minority. Odessa has its own distinctive maritime culture and Russian is the lingua franca there. Crimea has a significant Tatar minority and is overwhelmingly Russian-speaking. The east of Ukraine, especially in the Donbass, is Russian-speaking and with its mining and heavy industry much more looking eastwards than the rest of Ukraine. The center of the country and the capital, Kyiv, lying in the middle have to govern a country which is pulled in different directions. Member of a “Сотня” self-defense unit sitting just off Maidan Sqaure in Kyiv beside a box of Molotov cocktails
Thirdly, my personal safety was not significantly compromised in the areas where I traveled to. I visited Kyiv several times during the Maidan protests where over 100 protesters died in the violence with the Yanukovich regime. On the square and the adjacent streets there was a clear threat to personal safety albeit on an individual basis the risk on the days that I was there was not high. I also avoided the Donetsk and Lugansk regions during the fighting between separatists and Ukrainian troops and although I spent considerable time in Odessa, I was not there on 2 May when violence led to over 50 deaths. Understanding the real risk to personal safety is important as the international media can sensationalize a conflict situation and make a country seem a lot more dangerous than it actually is.
Russian-speaking Odessa is located on the Black Sea and Ukraine’s “summer capital”
Fourthly, the crisis caused the value of the Ukrainian hryvnia to plummet. Instead of an exchange rate of 10:1 with the euro, the new exchange became 16:1. Moreover, with most international tourists being too fearful to visit the country, the prices for accommodation such as hotels and apartments also dropped. It was not uncommon for me to rent a room for 1/3 of the pre-conflict price in euros. This clearly made life tougher for the Ukrainian population who receive their salaries in hryvnia but for someone from abroad, this made the country very attractive in terms of price for a holiday. Вы шпион?
Fifthly, the travel experience was much more rewarding. I believe being a traveler as opposed to a tourist. I felt that I gained the respect of locals for visiting during such a tumultuous period. On the whole, I find Ukraine a friendly country to visit but the local curiosity was even higher than normal when meeting someone from Western Europe during the conflict period. Typical types of conversations included:
Вы шпион? Американец? Русский? Почему путешествовать в Украину, когда идет война с Россией? So yes, it did feel like I was 007 in part. 😉 Maidan Square after the protests
These are the five reasons for which I traveled extensively in Ukraine during the conflict (which is still ongoing at the time of writing). My trips there have taken me to the west, east, north, southern and center of the country. Traveling through military checkpoints on a holiday may be unnerving for most but if it’s adventure you seek or a curiosity to judge for yourself what is really going on in a conflict then I encourage you to take a calculated risk and go see it for yourself.

← Last evening: Flight out of Kyiv 5 reasons why learning languages makes you sexier when you travel! →